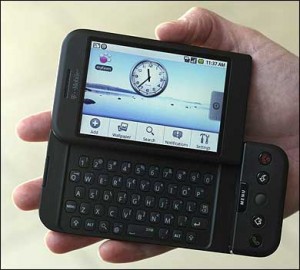 The main reason may be like this. The Google Phone device, known as the G1, is made by Taiwanese manufacturer HTC, and will be available on the T-Mobile network quite soon. The most interesting part is that it runs Android, an operating system designed in part by Google that aims to bring the desktop computing experience to mobile devices. According to Google's saying, the G1 gives one-touch access to most of Google's popular online services, such as its email service, YouTube video-sharing site and Google Maps.

Further more, The G1 features a touchscreen and a slide-out Qwerty keyboard, as well as internet browsing via 3G and Wi-Fi, music downloads, and the ability to buy and install additional software, programs and games on the phone from the Android Market application store. So with Google G1 Android Phone on hand, people can connect with Google conveniently and you can nearly toss your computer out of your window.

“Google needs the G1 to be a hit,” said Anders Bylund, an analyst with Motley Fool. “Given all the hype around the Android platform, a weak or disappointing first example could turn a lot of prospective buyers off entirely.”

Google G1 Android Phone will be officially on sale in the US on October 22. I believe this will be another big news this year in the world, especially in the digital industry.

But one question we want to ask now is, will Google G1 Android Phone replace iPhone by Apple? This is an interesting question, what do you think about it?

If you want to learn more about Google G1 Android, you can find it on Amazon and eBay.

Next Post: For Whom the Bell Tolls – Lyrics, Pictures and Videos, oops! Metallica