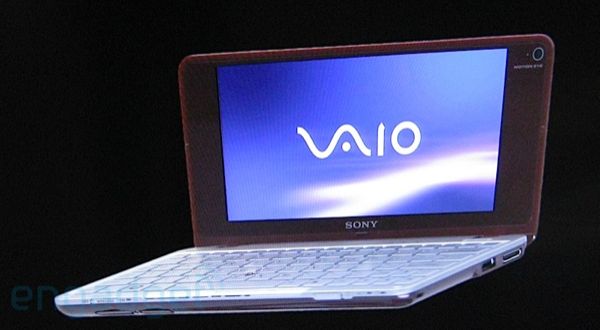 Sony just released their new netbook Sony Vaio P, and now this tiny laptop is loved by more and more people, they say this is a new generation of netbook in the industry in 2009. But Sony didn't say it is a netbook, anyway, in fact, it is a netbook.

Netbook or not, the Vaio P is undeniably elegant, with an instant on feature that utilizes Sony's trademark XMB interface, integrated A2DP bluetooth, integrated mobile broadband connectivity, and GPS. For $899, there is a lot of computer rolled in that miniscule frame.

Sony Vaio P is a diminutive 1.4-pound miniturized laptop with an 8-inch 1600-by-768 resolution screen. The Vaio P scores points on its insanely small size. It's really tiny. In fact, its depth is only a hair longer than my iPhone 3g (see the comparison in the photo). It may be a little too small for some, but if you're looking for the ultimate in tiny notebooks, the Vaio P is up your alley. The 8-inch screen packs in an extremely high resolution of 1600-by-768 pixels. Text and interface widgets are remarkably crisp on-screen, but quite small.

Sony also includes a Linux-based instant-on interface that uses the PS3-like Xross Media Bar UI but its implementation is a mixed bag. The raw functionality and design of the software is decent, allowing you to access music, photos, movies, messaging software and a custom version of Firefox. But some of the visual design and nuanced functionality are lacking to the point where you'd rather just launch Vista.

Now let's watch a video about this cool notebook:

So what do you think about Sony Vaio P Netbook?