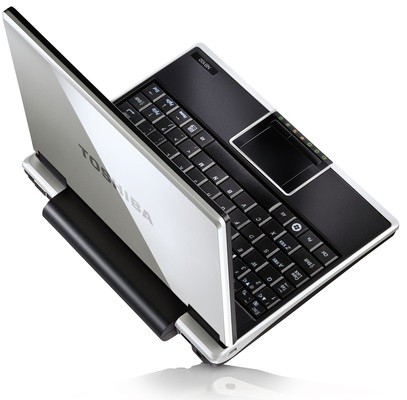 I have to admit I've been a big fan of Toshiba laptop since 2003 when I started my university life. I've used several Toshiba laptops since that time. Now I'm still paying much attention on Toshiba. Recently Toshiba announced their new netbook Toshiba NB100, and quickly caughtmany eyes in short time. Now let's take a look at NB100.

Hands-on with the Toshiba NB100 netbook

Toshiba has officially unveiled its latest portable computer system that has been designed to compete with all the other netbooks currently available on the market. Simply dubbed NB100, the new netbook is the company's first such device and, just like Dell's Inspiron Mini 910, it will be offered with Linux-based Ubuntu 8.04 operating system.

Toshiba has announced that the NB100 will deliver almost four hours of battery life, although details such as the battery capacity have not been disclosed. Nevertheless, one could assume there's probably going to be 3-cell and 6-cell options, as is the case with most of today's netbooks.

Connectivity includes Wi-Fi (802.11 b/g) and a 10/100 Ethernet port and there's three USB ports that get Toshiba's nifty Sleep-and-Charge tech that keeps charging USB gadgets when the netbook is in sleep mode while there's also an integrated 0.3MP webcam.

We haven't known the global price of Toshiba NB100 yet, but I believe it will be affordable. Prices for the NB100 in UK are as follows: the Linux model is £259; the XP version is available with 1GB of RAM for £299.

Well, what do you think about Toshiba NB100? Will you buy it when it is officially on sale in your city? Me? Of course I will.

Next Post: Christmas for Payatas, Help Poor Children Have a Warm Christmas 2008