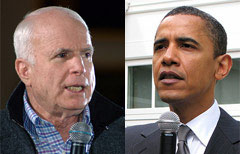 2008 Debate is absolutely one of the most affairs in the world, I mean in America. One thing we are all concerning is who won the debate. This keyword becomes one of the most hottest word on internet today. Let's take a look at some of their points first:

This debate is on: How to improve the U.S. economy?

And he also pointed out that the earmark spending of $18 billion isn't that big in comparison to the tax breaks given to the wealthy.

John McCain hit the GOP and Obama for being free spenders.

McCain said he had argued against some of it, but that didn't sound convincing.

McCain said: “I want to cut spending. I want to keep taxes low”

McCain said he wants to cut business taxes to encourage investment in the U.S.

But how did Obama response to that? He pointing out that many businesses “effectively pay one of the lowest tax rates in the world.”

Now let's enjoy an exciting video on 2008 Debate Between Obama and McCain:

After finishing watching this 2008 Debate video, what do you think, Who Won The Debate?

Who do you think will win the 2008 presidential debate in the end? Join this debate poll now! Please write down your vote on comments.