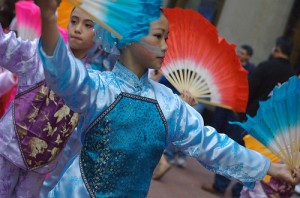 Chinese New Year Parade is an annual tradition in San Francisco. Chinese New Year Parade in San Francisco is the largest celebration of its kind outside of Asia. Parade highlights include elaborate floats, lion dancers, folk dancers, costumed elementary school groups, marching bands, stilt walkers, Chinese acrobats, and a 201 foot long Golden dragon, (”Gum Lung.”). The event also features the newly crowned Miss Chinatown U.S.A. and her court. This year many of the floats and specialty units will feature the theme of the Year of the Ox: 2009. 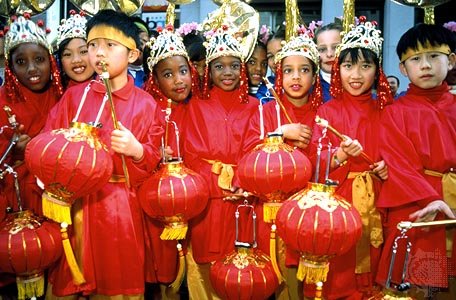 The annual San Francisco Chinese New Year Parade took take place  on February 7, 2009. It's time to get all the plans settled upon and start getting ready for one of the most spectacular parades on the planet. You can free to join the congenial crowds and watch the parade floats, extravagant costumes, firecrackers, and local color on the streets.

Place: Starts on Market, goes up Geary, down Post and ends on Kearny at Columbus 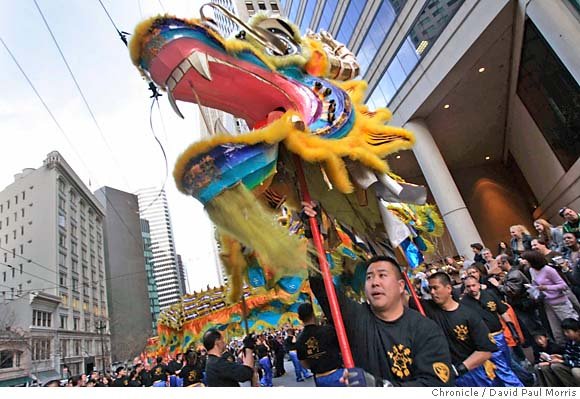 Since the 1860's the parade has combined the 5,000-year-old traditions of the Lantern Festival along with a good old American parade. It is one of the few remaining lighted nighttime parades in the country and (counting both the people watching along the parade route and the television viewers) is the most watched parade on Earth.It is also the largest celebration of Asian culture outside of Asia. You're going to have to hop a flight to Shanghai, Hong Kong or Beijing to see a bigger celebration.

Here are some interesting things during this 2009 San Francisco Chinese New Year Celebration:

February 7
Saturday 5:15pm-8:00pm
Southwest Airlines Chinese New Year Parade, Market and Second Street to Kearny and Jackson. Location of bleachers: Kearny Street (between Sacramento & California and between Pine & Bush)415 986-1370 or 415 982-3071. Free. $30 for bleacher tickets Named one of the top ten Parades in the world by the IFEA (International Festivals and Events Association), the Southwest Airlines Chinese New Year Parade in San Francisco is one of the few remaining night illuminated parades in the country. Started in the 1860’s by the Chinese in San Francisco as a means to educate the community about their culture, the Parade and Festival have grown to be the largest celebration of Asian culture outside of Asia. Parade highlights include elaborate decorated floats, costumed elementary school groups, stilt walkers and the 201 foot long Golden Dragon “Gum Lung”.
.
February 7-8
Saturday 10:00am-4:30pm, Sunday 9:00am-5:00pm
Chinese New Year Community Street Fair, Grant Avenue from California to Pacific, Pacific Avenue from Kearny to Stockton, Washington and Jackson Streets from Kearny to Stockton. Free. Immerse yourself in the sights and sounds of San Francisco’s exhilarating Chinatown during one of the community’s most exciting times of the year. Enjoy dance and music from throughout Asian and experience ancient and modern Chinese arts such as calligraphy, kite making and acrobatics.
.
February 7-8
Saturday/Sunday – 11:00am-4:00pm
Chinese Culture Center Spring Festival, 750 Kearny Street, 3rd Floor (Hilton SF/Financial District)Information: 415 986-1822. Free
.
February 15
Sunday
Chinese Chamber of Commerce/Chinatown Run 10K/5K Run/Walk YMCA Chinatown Contact: Lara Hitchcock at 415 576-9622 – 7:00am Pre-Registration at Portsmouth Square. 8:00am Race begins at Grant and Sacramento. This event benefits the youth and teens in YMCA programs. Kids are able to participate in seasonal Day Camp, Summer School, Residence Camp, After School Program, and Ballet! Please visit YMCA Chinatown to register on-line and for more information.

Where can you view the Chinese New Year Parade in San Francisco 2009? Here we recommend some best locations.

Best locations to view the parade:
1) Bleacher seats you can buy along the parade route.
2) TV broadcasters area along Union Square.
3) Many people line the area around Portsmouth Square. Pick up some food and enjoy the parade.
4) Review stand area at the end of the parade, where floats are judged
5) A street-view hotel room in the St. Francis Hotel, overlooking Union Square.

Okay, now it's your time to join this great Chinese New Year Parade!