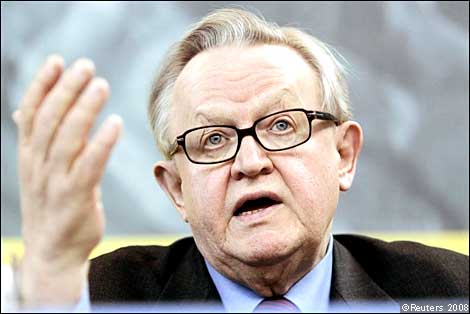 Martti Ahtisaari, the former Finnish president and United Nations envoy, has been awarded this year’s Nobel Peace Prize for his work as a mediator in international conflicts.

“Both officially as Sweden’s foreign minister as well as in capacity as a good friend, I offer Martti Ahtisaari my heartiest congratulations on this well-deserved prize,” wrote Bildt on his personal blog.

The Norwegian Nobel Committee said it had chosen Mr. Ahtisaari, 71, for his “important efforts, on several continents and over more than three decades, to resolve international conflicts”

Out of 197 people nominated for the annual prize, the committee said, Mr. Ahtisaari had been chosen “for his important efforts in several continents and over three decades to resolve international conflicts.”