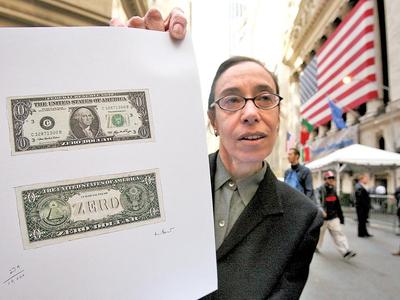 Where does Zero Dollar Bill come from? With the fin­ancial meltdown leaving many Americans wondering what a dollar is worth, one New York City artist Laura Gilbert gives us an answer — zero. Laura Gilbert plans to distribute 10,000 signed and numbered prints of the “Zero Dollar,” which looks like a dollar bill except it has zeros in place of ones, to call attention to the U.S. economic crisis. Laura Gilbert displays her artwork in front of the New York Stock Exchange yesterday.

According to New York Times:

Ms. Gilbert, who began working on the print after the fall of Bear Stearns earlier this year, sees the dollar bill as “symbolic of America’s stature in the world.” As a reflection of the crisis in the financial markets, she has tried to lower the monetary value of the print itself to zero by creating a very large edition of 10,000.

Now one thing is quite clear, economic crisis 2008 is very serious. Our dollars are losing their worth day after day. 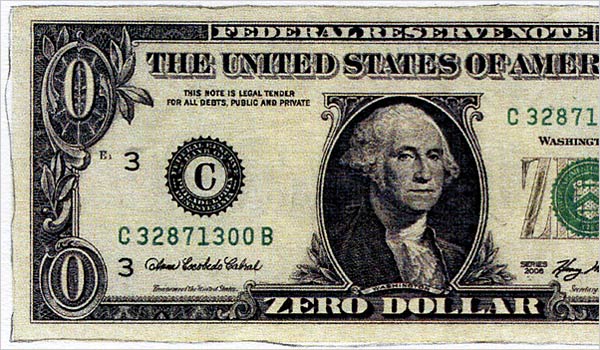 Zero Dollar Bill reflects very serious economic condition we are facing, anyone who can solve the economic crisis will win reputation from the people. Who can? Obama or McCain? Who knows!

For more detailed information, you can visit New York Times at http://www.nytimes.com/2008/10/05/business/05suits.html?ref=business

Next Post: Auto Air Conditioning Compressor You Ever Need