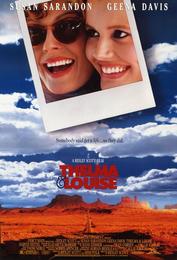 I watched a movie named Thelma & Louise last Sunday, this is an old movie made in 1991. The story is like this: Thelma was angry with his boy friend, and Louise couldn't bear her husband anymore, they were not happy at all in their lives. So they decided to take a travel, hoped that they could get out of boring life. They drank in a bar. But a man lured Thelma and tried to rape her, but Louise killed him, so they began to flee.

There are many storied after that, I don't want to tell you in detail here. What I want to say is the last action the heroines took shocked me. It is, when police chased them and plugged them beside a high cliff, the heroines had only one choice, that is, surrender to police. But they chose to drive into the cliff. I couldn't help crying when I saw this scene.  I can't describe how I feel here, I just all of my blood is boiling.

This movie gives me much much more, I should say thanks here. If you wish, you can watch it by yourself.

Next Post: Computer Becomes A Part Of Our Life